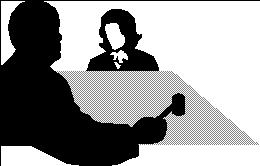 May the Grace and Peace of our Lord Jesus Christ be with you. This month there were four road reports filed. Only one police stop involved the issuing of citations. At the other three stops, no citations were issued, nor were Heaven documents confiscated. Yes, it is possible to be pulled over in a Heaven vehicle, show your Heaven license and registration, and hear the officer say, "Your papers are in order. Have a good day."

It would be an easy life if all traffic stops ended this way, but the battle is far from over. It is inevitable as you travel in the Kingdom, that someday you will be pulled over, hauled off to jail, and forced to stand before the courts of men. When it is your turn, how will you respond? Will you build a defense for your actions, even though what you are doing has already been settled in Heaven? (Psalms 119:89) Will you play their game, hoping to convince them you have broken no laws? Will you freeze up and stand mute through the entire proceeding? What principles will guide your actions? How should citizens of Heaven respond to court?

We researched how the early Christians viewed the law courts of their day. We found that Christians, up until the time of Constantine, regarded the law-courts as an evil which had to be patiently endured, with submission to the will of God. Two principles set the early Christians apart from those around them. First, they never compelled anyone in any way. Second, they never went to law against another. They did not take part in the judging of others and did not participate in the process whereby they were judged and condemned by men's courts.

While I was in jail in 1987, God spoke many truths to me about the courts. His Words have saved me from building false hopes for a victory according to men's tribunals. Now I know: